THE DISCREET CHARM OF BRUNO BOIVIN 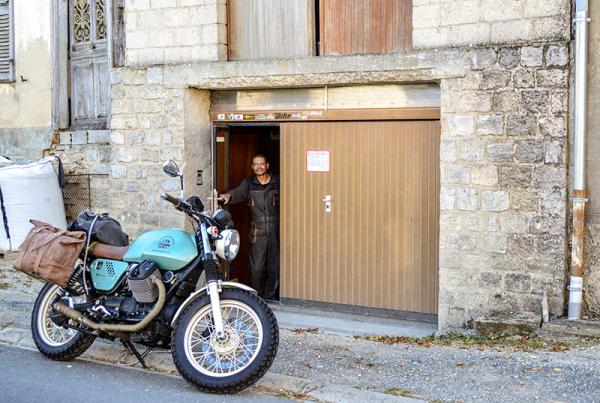 “Hong Kong”, said the only custom motorcycle engineer in Eastern France who spoke English. “I learned to speak English in Hong Kong. I was there when you gave it away”

Thank God, I thought, for the ex-colonies and a man who spoke both engineering and English simultaneously.

Thirty minutes is a very small window in which to effect an international rescue from an unknown – by me – motorway deep in rural France. But I called the RAC as I knew not the 11.30 rule; by pressing button three I was automatically transferred to the charming helpful people of the French recovery section.

“The motorway is owned by a private company” they helpfully explained. “So first you must call the emergency number and tell them where you are. They will send a transport affiliate to help remove your moto and we will organise everything from there. You must say Je suis pen. Like the pen. But ‘urry, it eez11.30”

So I called the emergency number and spoke English clearly with a French accent saying “I am the pen. But ‘urry it eez  11.30”

The response was “Allo? Allo?” and then a click as the phone was closed down.

I tried again, this time using the code words “je suis pen” in French, and was transferred to an English speaker. We established where I was by the simple expediency of tracking my mobile phone location. Fifteen minutes said my helper. And, true to form, a truck arrived in 15 minutes.

I tried to explain about coming to a stop with no power for the lights or instruments but the driver wasn’t really interested. “Lunch” he said, “in ten minutes. We drop zee bike, you go to lunch, come back at two.” Bike loaded, we exit the petrol station to which I pushed the motorcycle when it failed on the toll paying motorway. We exit through a service gateway onto a country lane – so at least I didn’t have to pay the exorbitant toll fee – and storm through the countryside to a small town with a large garage – cars, for the use of.

The driver was pleased, it was two minutes to twelve. He didn’t unload the bike… it was, after all, lunchtime. In the drive through the town he pointed out three restaurants. “Go” he said, “eat”

I headed to a small museum to waste a couple of hours. I’d hardly walked over the portal when a charming young man approached and said “Sorry, we are closed for the lunch”

Well, at some point you have to go with the flow. So flow I did to the boulangerie and bought a kind of pastie stuffed with a rough chopped country paté with coffee to go. I tried to pay. “No money Monsieur” said the sales assistant and pointed to a kind of ATM with blue flashing lights. I fed cash in, it fed coins out. I learned later that this was so the assistant could handle food, but not touch dirty money. Obviously a great IT salesman was covering this area.

The pastie paté was delicious. Under a clear blue sky I strolled round the town eating whilst admiring the human sized Empire style buildings. No building was more than three stories high, the streets narrow, doors with paint faded and no people. All, presumably, at lunch.

Fourteen hundred hours, back at the garage. The manager had looked at the bike, now on the concrete pad outside of the recovery and repair area. After typing importantly and then speaking to other customers who were not even in the queue of one that I had started, he looked at me and spoke in a language I did not understand. The upshot, it appeared, was that without even a diagnosis Moto Gelato was to be transported to the nearest Moto Guzzi Dealer… in Paris. “Because” he said with disdain “mon garage is not for moto”.

“Well whoopee do” I thought. Parisian Dealership mechanics are probably twice the price of London Dealerships. So an hour’s diagnosis would be in the region of £150 finest English pounds, let alone the over-valued Euro, the sneering at my own currency and the repair work still to be done.

To Google then. And, praise be, within a few moments Bruno Boivin entered my life as the owner of a Custom Motorcycle Tuning Shop and all round Motorcycle Engineer just seven kilometres distant.

Could he diagnose and repair an alternator problem? Maybe. Would he try? Sure! But no guarantees. I relayed this information to the marvellous in-country team at RAC. They confirmed Bruno was prepared to take on the challenge and organised the motor car garage to move, avec urgence, the moto to M. Bruno Boivin in Passevent deep in the forest of Argonne.

Onto the truck, and off we go. Bruno’s place of business is very discreet; no neon sign or hoarding to advertise his presence – merely a hand written note tacked on to a wooden door. “I prefer”, he said, “to remain anonymous”

The bike is de-trucked and wheeled into his garage to fit between various Harleys, a sweet MBK, some Japanese customs in the process of renewed life as hipster speeders and a couple of enduros. On the walls are shining motorcycle parts, racks of tools, lengths of steel and tube. I spotted a lathe, some milling equipment, industrial sanders, pipe bending forms, welding equipment, a paint sprayer; a man who knew his business and like to do things for his customers by using all of his skills and knowledge.

Meantime, relying on my own deep technical knowledge of all things alternator, and more especially the warnings from good friends in Poland that rotor had almost given up it’s life, I explained to Bruno that speed dials on Gelato had been flickering between 30 mph and 140 mph whilst cruising to an unwanted stop. Plus the lights would not switch on and Moto would not start.

“Probably le thingy” he said with a French accent. Now here was a man I understood.

The alternator cover was removed and… “You have a loose wire”    Praise be to every single god of the road! Not a trip to Paris or expensive OEM parts. A minute or two of excellent skill displayed soldering the errant wire. Bike started with the help of additional battery, battery shown to be charging… Alors! Onward!

Except both Bruno and I agreed that perhaps the battery should be charged overnight. Bruno suggested the bar in the village where rooms were to be had just as the RAC called and said we have found you a hotel for the night and a hire car in which you can drive home to England. “No matter!” I cried, “I will stay in the forest and save you corporate money”

Ms. RAC, with such a lovely voice and immense grace said “That is fine. Send us the hotel invoice and we will reimburse you”.

To the bar with Bruno – in a car with Mrs. Bruno and their charming daughter who came along to supervise – where a very smart room was found with shower en-suite and beers ordered up for the team. Well, coffee for me. 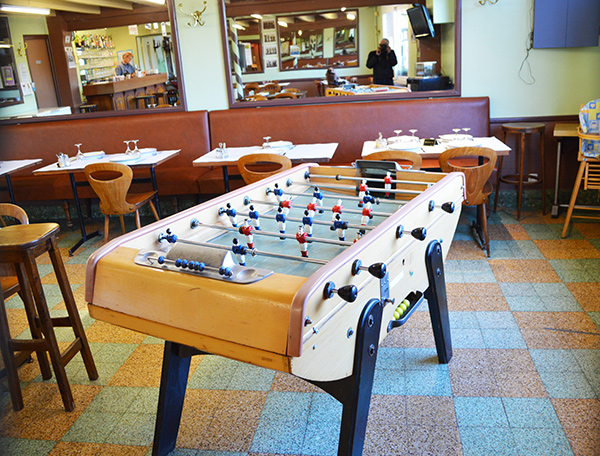 The bar was French traditional at it’s best. Cream décor, much polished wood; original seating from decades earlier, foaming beer, the smell and view of the kitchen. Locals sat on tall bar stools chatting companionably, a couple of them playing a vigorous game of mini football on a table straight from 1958. Bliss.

One last problem. I had no money. And no-one takes cards in this part of France.

My fine technical expertise solved this in a trice. I ran up a tab -  a fine supper of goat cheese and fig with a piquant salad and the always wonderful French version of steak and frites; in the morning I paid surprisingly little to the ensemble via bank to bank on the Internet.

More of the morning. Woken by the baker delivering fresh bread and croissants; bottomless coffee pot waiting on the table and outside to skies deep blue and a warm sun shining.

If you liked the story, check out the book. You can buy Notes From The Road Vol IV right here