A TALE OF TWO ENGINES 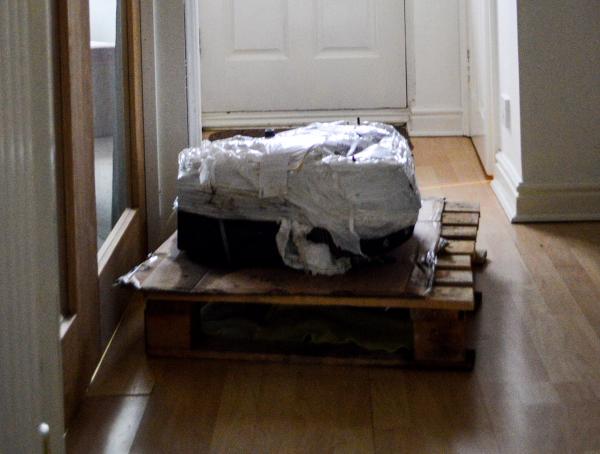 A TALE OF TWO ENGINES

Regular readers will know that I blew up the engine of my Guzzi V7 café returning from Ukraine a month ago.

Since then Moto Gelato has been sitting with its entrails all over the floor at the Motoracer Garage and Coffee in Wroclaw, Poland. Well, I say that. Miloscz and his wife Beata are very tidy and the last pics I saw everything was looking shipshape and Bristol fashion.

For non-nautical readers shipshape and Bristol fashion is an allusion to my own Navy past and has little to do with this story other than that I do have some navigational skills – with and without and GPS; and quite possibly superior skills to the international courier companies.

On the 23rd of August I bought a used replacement engine on eBay from the highly reputable ArgentMoto based is Fasano Italy and requested they ship it to Wroclaw.

Which they said they would, except apparently the delivery tags got mixed up and the engine arrived two weeks later whilst I was driving my wife to Central London for emergency eye surgery.

I contacted Argent Moto by text from my phone which, inside the hospital, could not be recharged, saying, more or less “Thank you, but wrong country”. A silence ensued.

The following day an email’; We will collect the engine and send to Poland. Here is the tracking number”.

Very well, but I now had a further dimension with which to confuse and add time pressure. I had decided to participate in the “Distinguished Gentlemen’ Ride” not in London but Wroclaw, on the 25th September. So three weeks for delivery and an engine removed and the new used one to replace. No problem – except Miloscz, an honest man, said… “Well, we will try but I cannot promise”

The engine sat in my hall for three days. Finally DHL arrive on Friday and take it away. I eagerly watch progress on DHL’s tracker over the next five days. Heathrow, Gatwick, Milan, Lyon, Milan, Heathrow.

A text is sent to Argentmoto.   “Whaaaaaaa?” A reply is received. “we will retire tomorrow and deliver in 3 days.”

A new message from Argentmoto. “We have started a new engine. Here is the tracking code”. Confused but eager I look now at a Fedex Tracker. Rome, Somma, Charles de Gaulle, Cologne.

To Fedex for the next 3 days. Cologne, again. Warsaw and then, on the 9th of September… Hooray! Wroclaw!!!!

But the Motoracer Garage and Coffee is closed for staff holidays and only the owners are present of the premises. The upside is the replacement engine is four years younger than the original. With more horse, torque and less petrol per mile.

The full story comprises Dinner for One,
Of Ignominy and Shame,
The Italian job,
A Tale of Two Engines,
The Discreet Charm of Bruno Boivin and
The Tango Club of Chatelaine.

Notes from the Road Vol IV is available here