THE ROAD TO ZATOKA 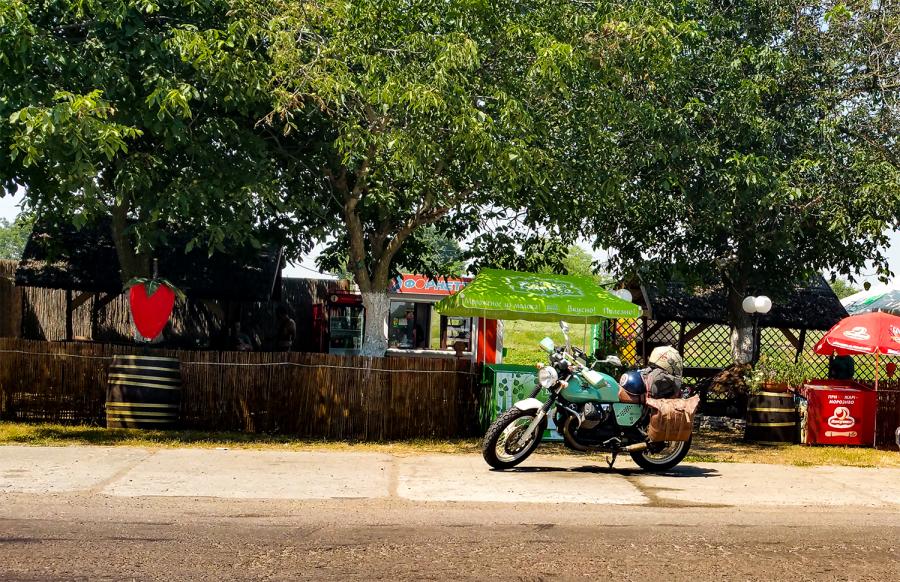 The Coca Cola is cold, and served in a plastic cup so thin it could be reused as a condom.

No matter; it is not to be rushed, this drink, for I have sweltered two hours in leathers in 36 degrees of heat, as measured here on the continent of Europe.

I have travelled here before. I was searching for the Black Sea ferry to Batumi, in Georgia; eventually found and a voyage of three days enjoyed.

The road surface was bad seven years ago. Since then a million tonnes of trucks and cars have driven over it and the repairs are yet to start. But some things are new; bright orange road signs warning of bad road surface ahead.

Since Crimea was stolen by the Russian Dictator, Ukrainians have chosen Odessa and the surrounding beaches and countryside for their summer playground. As a consequence, the traffic has been nose to tail for fifty kilometres. Thank goodness for Moto Gelato, said I to myself, as I wove through the traffic on rutted melting roads with serious holes.

There is no point, on this road, to overtake vehicles at speed; it is also singularly dangerous. And, in any case, there are junctions with and without traffic lights, queues of trucks and accidents. I limit overtaking to when the traffic stops or stalls. My life is worth more than twenty seconds gained when overtaking at speed.

The journey then, is four hours instead of Google's projected one point five. No matter; finally I arrive at the designated hotel, a grey unprepossessing cube of thirty, three by three rooms.

Reception was one of the bedrooms with no bed; a seemingly scatter-brained teenage girl in charge could not work out my booking. A young man, presumed to be her manager, arrived after being summoned by phone.

It took him just ten minutes to tell me that the online booking I had made just thirty minutes earlier had been for the week ahead; there were no rooms in the Inn today.

I did not mind; far worse happens. Also, I was sitting in the shade of their building, sipping water, taken from the bottle strapped to the bike. The water was hot, but sufficiently liquid on the tongue.

The booking.com app on my phone treated me kindly once more. The hotels in the village of Zatoka were booked to 92% but a bed was found a few kilometres on.

Saddle up and on the way and I passed the hotel in which I stayed seven years ago after I could take the toilets in the camping ground no more. It was here that I met Walter, a young German IT manager and his girlfriend – a fine couple. It was here that the rain fell so heavily that the main street was flooded and impassable within a few minutes.

But today, nothing but sunshine. And as the road ran out and turned into sand, there was the gleaming white walled Hotel Alba, sitting right on the beach with a cool breeze incoming.

We are looked after, we travellers.