THE ROAD TO STARA LUBOVNA 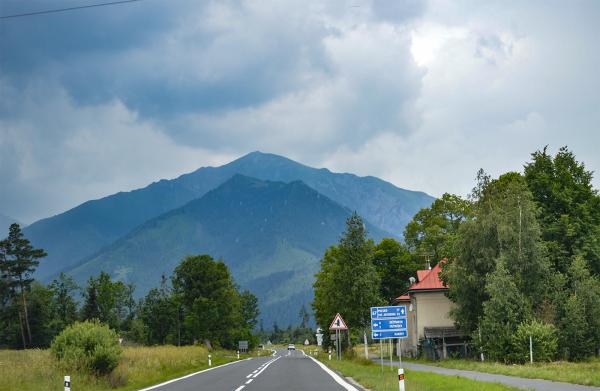 JOURNEY 2017. THE ROAD TO STARA LUBOVNA.

I'd passed through these mountains, the High Tatras, once before. I was riding alone on a Victory Vegas on the way to the Kurdistan. I rode the mountains in the pitch black night because I couldn’t find anywhere to stay. In the end, I gave up, and parked the Victory at the side of the road and slept fully dressed, in a ditch, in the rain.

This time it was different. I was on Moto Gelato, in daylight. This time I was aware of the dangers, of the road. Little had changed. The roads ran from good to awful, greasy in the rain on the hairpins. But I could see lakes, rivers, mountains. And, of course, the rain. And also, this time, I have yet to set a destination.

My journey here from Poland was mainly uneventful. Four hundred kilometres of fast running motorway until Krakow and the right turn into the mountains.

Villages, surely unchanged for centuries, but now coloured prettily in pastels, strung to together across the valley floors. In one village, a small boy marched past; head up, shoulders back, good posture and stride. Obviously soldiers were marching inside his tawny blonde head.

There were repairs for several kilometres. The road bed had been scarified, ripped into tiny valleys and cross currents that took hold of the rear wheel and moved it to its own accord. Petrified I rode in the centre slowly, holding back a queue of impatient motorists. A workman jumped into the road, shouting, urging me on for more speed. I replied, but impolitely.

Another village and a dark haired hand maiden of joy strutted her stuff in smart green jacket, short black skirt and tippity high heels. In truth she was so well dressed she may have been a wedding guest who had lost the wedding but I was past before the question formed in my head.

The SatNav, ignored by me and sulking, got us both lost. I deployed the dice, turned right and found myself in mountain town. The tarmac turned to cobbles and pitched me into a massive central square where a huge rock concert was pounding out the pace. Sat Nav returned to life and took me all around the square. Mine was the only vehicle moving, exhaust heard rumbling in a break in the music and the audience turned to applaud me. A small lane appeared; the Sat Nav urged me forward and I left, wondering if I was in the middle of a surreal dream.

Ahead the mountains darkened, steam rose as if in a tropical jungle. Elevation increased, the road narrowed to a single track and a border sign appeared. Down now, still on a single track and I was spilt onto a six lane motorway which, within two kilometres, changed into holes decorated with tarmac.

Another few kilometres and the valley opened before me, green meadows, golden corn, a river shining in the distance. And there, in front of me, the remembered fortress town, built with multicoloured Soviet apartment blocks, high up on a hill.

And this night, thankfully, I would sleep in a hotel.