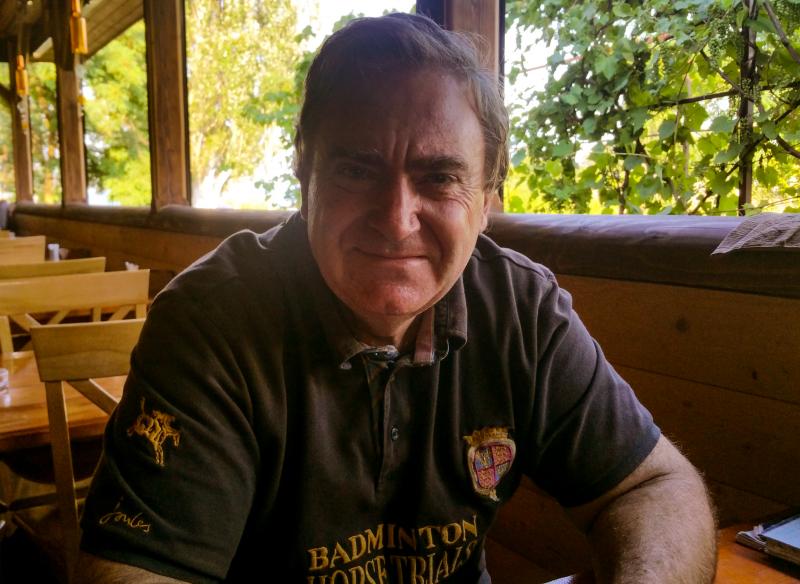 JOURNEY 2017. THE ARMENIAN HOTELIER AND A RIDE IN THE NIGHT

The Hotelier, Samuel Torunian, an emigré from Armenia.

He sits at the first table on the right in his restaurant with his book of room bookings in front of him. We have no mutual language so my Couchsurfing Host, Alexandra, from Chisnau, the capital of the previous country, translates his long and ardently apologetic speech. The short form of which, at 10.00, is that no rooms are available until 13.00.

He and his nephew, a four-times graduate of Yerevan University, have refurbished the hotel and built a two-storey building with eight rooms from wood, with their own hands. And the restaurant too. In the evenings, Samuel is the chef for the shaslik; perhaps one of the best I have tasted.

Even with no language it is not long before I understand that Samuel was for 13 years a professional footballer for the team Ararat-Yerevan. He shows me film, on his phone, of his nephew, a player for Manchester United. I am happy for him, but tire of watching quite quickly. I am not a football person. Besides, my wife, in England, supports the Arsenal.

I arrived at the Comfort hotel, at Vapnyarka, near Odessa in Ukraine by a circuitous route.

The previous day, in Chisnau, Moldova, my Couchsurfing Host expressed a wish to visit the coast. There is no coast in Moldova; I said I am going to Odessa to make a surprise visit to my business partner who is holidaying with family and friends and asked, “Shall I take you there?”

She had courage, it must be said. Her first ride ever on a motorcycle and no option, once we go, to turn around and go back home for tea.

At four in the afternoon, in Chisnau, we left, heading east.  Google Sat Nav was as falsely optimistic as ever; the three hours and twenty-eight minutes predicted turned into eight.

The roads were not good. The city of Tiraspol, on the most direct route, is in the hands of Russian backed insurgents seeking bribes and other extortions, thus to be avoided. A border was crossed, lines of trucks the size of houses with headlights blinding, massive repairs negotiated, in the dark, with raw road chippings spitting out from under the tyres and red dust in my eyes thicker than the smog of New Delhi.

And finally, to Odessa, at midnight, with the only rooms seemingly available above a twenty-four hour car wash where the power system for the high-pressure pumps were loud and insistent the whole night through. In the morning, a walk of five hundred metres to get instant coffee from a machine.

This was not the Odessa of the Opera House and Potemkin Steps well-loved from previous visits; this was a carwash backwater nightmare.

To the coast then, with the help of booking.com, to meet the Armenian Hotelier.

An hour through the city, topping a rise and there, shining in the sunshine, the sea. One hundred metres down the hill and on the left, the Comfort Hotel, the Armenian Hotelier and his graduate nephew.

So friendly these two; and via translation, good tellers of tales.

To the cabanas to sleep; but so thin the walls that in the room on the left I could hear Alexandra earnestly praying and on the right a woman elbowing her husband to stop his snoring.

The next day Alexandre admitted that her new-found enthusiasm for motorcycling, and Moto Gelato in particular, had appreciably diminished. The trouble, she noted, was in her thighs. The vibration, on the road, although probably helping to reduce cellulite, was too painful for her to go further.

I find the vibrations from Moto Gelato oddly comforting, but then my legs are like string with knots for knees.

In an hour, she was gone to visit with friends in Odessa, and thence on a bus to return to Moldova.

And me, a day later, to revisit Zadoka.