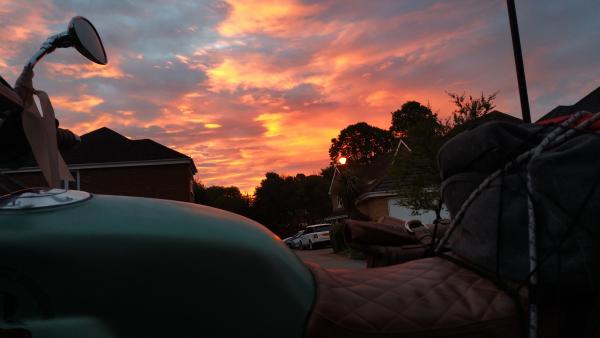 The first minutes of the first day of my 2017 journey started well enough.

As I stepped through my door I heard the bird chorus and felt the soft warm dawn around me. I tied my granddaughter's pink satin hair ribbon to the mirror, to remind me which side of the road I should be riding on.  A simple thing, but the emotion welled in my heart at the thought of not seeing her, or my grandson, for a couple of months.

My experience is that I remember which side of the road I should be riding on for a few days and then, as confidence builds, I ride onward and wonder why all the people in the cars and trucks are flashing their lights at me.

My experience is also that, in the east, and certain parts of the west, I may be taken to task for sporting a pink ribbon to wave in the wind.

But here, too, was another big uncertainty. Was the pink dawn I saw truly pink? Or had it glowed red a few minutes earlier in a Shepherd’s warning of bad weather ahead.

Emotion contained, bike burbling and I’m off down the drive, hand raised in a romantic wave hoping my wife is waving from behind the blinds; but at 4.30 a.m. I realise this may be a forlorn hope.

To the motorway in a few minutes, the course set south west to Dover. Little traffic apart from the trucks ferrying the lifeblood of commerce and the thought that the sooner Amazon starts it’s delivery drones how empty these roads might be. With French truckers rioting first over the loss of jobs.

I pass a couple of Harley riders – a surprise to find Harley people out so early – waving my left leg as a greeting in the Continental fashion.

Fifty minutes into the hour and half ride and the low petrol light comes on. How can this be? I rode to Wales two days earlier and proved a tank would last 180 miles. I filled up when I got back from Wales to be ready for today,

I slow done and ride the hard shoulder while I puzzle this out. The Harley guys pass and point at my rear. “What now?” I thought ”What fresh hell is this?"

A look at rear showed one of the bolts on my licence plate had fallen out. I secured it with the general bits of string that tied down my luggage, but what had this to do with the petrol?

I started off again but now the word FUEL was magically flashing on the dashboard a counter was ticking down,

I fought with my memory, a hard thing to do with an age related black hole. Had I filled it, or had I not?

I stopped again, dialled up the nearest petrol on Ndrive, a Sat Nav system no longer supported by the defunct company.

Petrol ahead, three kilometres I was told.

I do sometimes have challenges converting metric to imperial and vice versa. But I’m convinced if I change the settings the entire thing will stop forever.

I knew I had to get petrol fast, I’d taken off the petrol cap, shook the bike but could see and hear nothing.

Riding on, three kilometres had long since passed; at twenty, with the Grace of God I turned for Ashford, Kent and was directed to a shopping centre. Sainsbury’s had just opened and with a lighter heart I rolled to a stop to fill up.

And then ran in the shop, and, as it had no lavatory, ran to the front of the queue and shouted “Help, I’ve got petrol in my eyes”

The woman behind the counter, Sainsbury’s trained and English to the core, rolled her eyes to and said to customer at the front of the queue, “I’m so sorry Sir, this is the second person who has pushed in front of you. I will deal with him and come back to you”

I’m listening to the niceties, hopping up and down in pain, reliving the moment the petrol sprayed from the tank into my eyes, wondering if I was to go blind, and thinking this is quite a busy morning so far.

And perhaps I hadn't filled the tank the day before.