The role of traffic police in the former Soviet Union is well known and has little to do with controlling traffic; the primary role is to extort bribes to supplement their miserable salaries.

The situation is changing, but last year I still had to pay one bribe in Ukraine – this because I was in a hurry and didn’t have time to wait for the switch sell (from fine to bribe)

Corruption amongst traffic police in new EU countries – Bulgaria and Croatia I can personally attest – is still rife.

Regrettably, in Russia, policewomen have been ordered not to alter their uniforms into miniskirts. 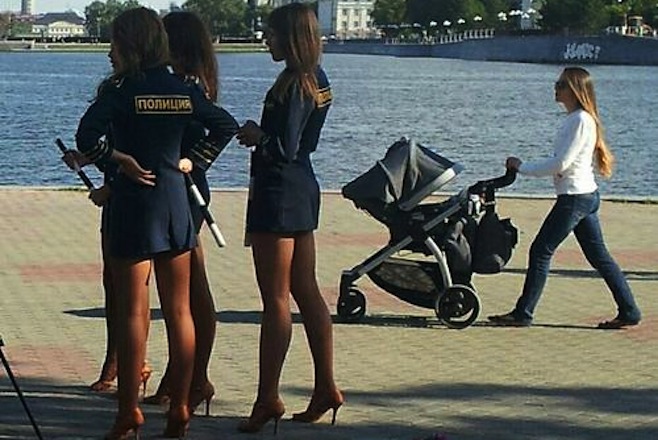 How to avoid paying traffic cop bribes in the new EU.

In the new EU countries there is not much to be done because they only stop you for genuine violations. The switch sell, if it happens, is when they start telling you must surrender your plastic licence to them, go to the nearest town and make a bank to bank transfer to the Police Authority and bring a receipt of payment from the bank back to them at the point they have stopped you.
To which you would normally say “Oh dear, is there something we can do on a more local basis?” They’ll make you an offer but because you’re in the EU the shakedown is going to cost €30 to €50.

However, the smart answer is “Yes Officer I will do that – here is my licence”.

You can do this because you have had the foresight to garner two or three licences from the DVLA before you left home. And the DVLA will let you get more licences on line so you can stay topped up.

How to avoid paying bribes in the former Soviet Bloc

There are two parts to this. The first is the more important.

When you are stopped, get off your bike, take off your helmet, walk toward them with a smile and hold out your hand to shake theirs. This show of international friendship is so alien they may well just look around your bike, ask which football team you support and say “Nice bike, go”

The next thing is that they will ask you get in their car. This is so they can make their pitch out of the weather and away from any recording devices you may have. So try not to get in the car and also record everything as openly as you can.

They will pull out an enormous form and start to fill it in. This form is the “protocol” which is the document to record your transgression and will be placed before the court, when you go to court. Amazingly almost every traffic violation has a fine of €200 or more. At some point during the form completion they are going to say the magic words “€200” whereupon you suck in your breath and they say, well… how much money have you have got with you?

Interior Minister and traffic cops. He was fired, so were they.

The going rate is €20 which seems quite reasonable until you are stopped five times a day.

Traffic police cannot arrest you into custody for a traffic violation; they cannot ask for payment of fine which you pay into a bank, you cannot be stopped at an international border for a traffic violation. So if you insist on the protocol and keep smiling they will let you go. Should they ever go as far as issuing it, write on it (it’s in duplicate) “I do not understand what the officer number (from their badge) is saying”

Meantime, and as I write this in mid-summer 2015, the traffic police in Kiev are all being fired and new recruits, graduates who speak more than one language, are being hired at ten times the salary.

This worked in Georgia where traffic cop corruption was wiped out almost overnight. Let’s hope it works in Ukraine too. The other former Soviet countries? My personal experience is that apart from Georgia the cops are still underpaid and still extort bribes to make their salary.