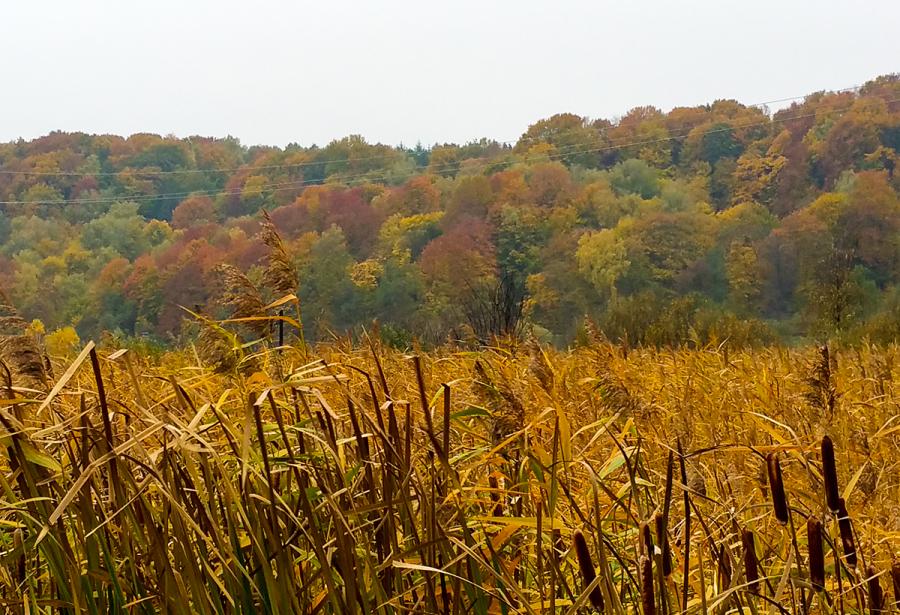 THE BOSOM IS REMARKABLE, AND THE POSTERIOR, IN SKI PANTS, IS NOT WITHOUT ATTRACTION.

With the colours of autumn enhancing the day the road was perfect; lumpy bumpy, but traffic free. The silence, when stopped, and the engine off, was all consuming. Birds sang, the sun was warm but my thoughts were fixed on my dice.

The turn onto to this road was, according to the satnav, perfectly legitimate. But I had no internet connection and the route had been downloaded, not live, leaving an error of margin of two kilometres. Two kilometres away from the prescribed route and the screen was empty. No route, no position, nothing but birdsong, whispering leaves and me.

Even for Ukraine’s pseudo motorways, where people, dogs, cattle and chickens wander free, this road was not even close to pseudo.

The dice then. Left for even numbers, turn right for odd. Or should I trust to luck and road sign for Kovel and the Old Military Road.

An hour earlier I had pulled to another stop at the side of the road because on the motorway on to which I had just turned the traffic, an avalanche of steel  across three lanes, was travelling towards me at speed. ‘Not right’ said a voice in my head. And behind me airbrakes hissed bringing a twelve-wheeler to a halt.

Whilst I stared at the traffic, then at my sat nav and then at the traffic again the driver of the twelve-wheeler had arrived at my shoulder.

We used the language of transcontinental travellers everywhere. We looked at each other’s phones, scrolled left and right, mumbled, multiple use of the word describing Anglo Saxon sexual congress and then pointed out to each other that the three lane motorway coming towards us started in earnest just five hundred metres ahead. From that point, travelling west, it was a dual carriageway with no central barrier.

Simply a matter then, of waiting for a gap in the traffic, accelerating at speed for the said five hundred metres, bit of swerve and all would be well.

We agreed, in the same trans-continental language that this was the best way forward. But he would let me go first.

The gap in the traffic occurred, away with hard throttle in first, second and when the engine screamed to third; the swerve and all is tickety boo. In my mirror I saw the truck complete the manoeuvre to his satisfaction too.

An hour, and to the rich autumnal road on which I now sat astride Moto Gelato.

The trouble with navigating by dice is that you must follow the throw. You cannot throw two or more times to get a result you wish for; for you have no idea where the wish will take you. The rule is to follow the dice until a cross road or t-junction or dead end appears. Only then can you throw again.

From road signs and my limited Ukrainian I thought there might be a village ahead. I would ask for directions perhaps, before the finality of the capricious dice.

A village, a shop and I’m up the steps into the store and in my finest English, babble of the road to Kovel, internet and sat nav.

A conversation ensues amongst the staff – one in mid-thirties who spoke of me as being an American before I corrected her, and the other in her sixties who had knowledge of nothing outside the village and what she saw on television.

But they did have internet. Except the password was unknown.

She is woman used to taking charge. Perhaps head of the village church council or Womens Institute, she is in here early-fifties, naturally blonde, make-up tastefully applied, a pillowy bosom and rounded posterior, plump, partially concealed by a smart black gilet, she takes my arm and propels me out of the shop

The road is crossed, I am gestured forward, with my arm still gripped, to a small building which, rather than being her home where she might offer me home made cake and tea, turns out to be an internet shop, here in the middle of the village in the middle of nowhere.

Control of the internet store is in the hands of a dark haired mousy looking girl, early twenties, who, once the problem is described, looks at me with pity thinking, no doubt, that age has encroached too far and this more than mature motorcycle traveller has completely lost his marbles. In addition to his dice and the internet.

A command from my blonde companion and my phone is connected to the Net. Maps appear, directions shown and voice of the GPS states ‘U-turn ahead’.

Interestingly, dice never offer the option of a u-turn.

Out of the shop, and I am delivered back to the motorcycle. Her hand is still firm on my arm; her other hand takes mine more gently. A brilliant white smile, and in the velvet contralto voice of an actress in semi-retirement, I am given, in English, a long, lingering and breathy ‘Gooooodbye English’

I ride away with joy, smiling at chance encounters in a small village in nowhere.

If you enjoyed this note, take a look at the books