THE MOSKOVITCH, MIG AND MOTO GELATO 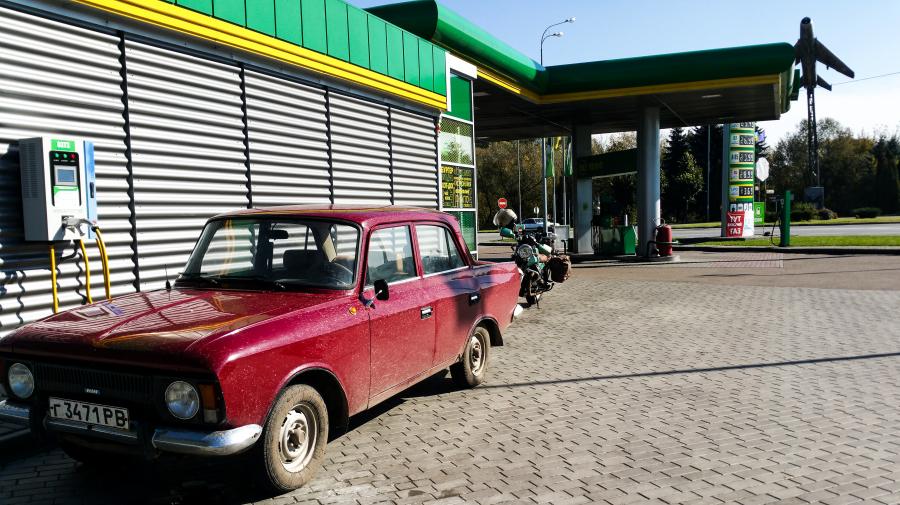 THE MOSKOVITCH, A MIG AND MOTO GELATO

The border queue from Poland to Ukraine was longer than usual – maybe people returning after a weekend away. It was over two hours, long enough to make the acquaintance of a BMW rider who was returning to Lviv. Long enough to tell him about the disasters that always seem to befall when I ride into the city.

With good English he told me that he would guide me out to the road to Kiev and plentiful hotels to stay the night. And this he did at a speed, in the dark, with which I was not entirely comfortable for the visor in my helmet kept getting steamed up. And it was raining for a good part of the way.

Well met and helpful and I did not have traverse the cobbles and holes in the city centre. Having said goodbye I turned to booking.com and looked for a night’s stay.

The first motel was five minutes away but they didn’t take cards. The second, and third... the same result. Only cash. And the only cash I had was not enough.

To the Ibis where I knew they took cards to find the man in the queue in front of me had taken the very last room.

The cobbles of the inner city were lit golden from my headlight and gleamed in the grey damp mist; the streets where I roamed looking for an ATM were narrow and old, the holes in the cobbles were bigger than the doorways of the surrounding block apartments. And found, at the second attempt, a working Bank o Mat that actually distributed money.

Cash in my pocket, good to go, but the GPS had failed because I had no internet connection. More roaming madness and the lights of a four star hotel beckoned in the gloom. Yes, they took cards as well as cash but the kitchens were closed even for a simple coffee with no froth.

To bed then, hungry, tired but up in the morning, sun shining, wifi connected and inclusive the breakfast in the price.

Onto the E40, Europe’s longest road and a range of low mountains avoided as the road turned north then east and onward into Ukraine’s steppe. Golden corn still unharvested, blue skies, Ukraine’s flag perfectly depicted here in the countryside.

The E40 and equally signed M06 is not a motorway. On Sunday morning it wound through villages with crowds spilling from green and gold domed churches, the domes and the jewellery of the pious catching bright flashes in the sunshine.

Joining the churchgoers are chickens, cows and horses and, on faster stretches of dual carriageway, traffic police and traffic police stations straddling the road to advise innocent speeders that their innocence is now lost.

Up now for petrol and the strange constellation of the Moskovitch, MIG and Moto Gelato all caught together in an unknown town in the middle of the 550 km ride to Kiev.

Another monument in the previous town was a tank in the centre of the roundabout. It’s not as if Ukrainians need reminding of war… there is one still going on in the east.

And to endorse that fact, and a few minutes later at a marble shrine in the middle of the road, a black bearded, black robed priest with a huge hooked nose incanted a service all on his own, dedicated to the dead and all the Saints.

At the side of the road, particularly near junctions, Babushkas sat selling their garden produce. The further east the more sophisticated the displays. Huge pumpkins, golden orange and round, the size of vintage iMacs, are placed in pyramids. The synchronicity does not end; pears, large and last of the season, are also piled in pyramids to urge the passing traffic to stop and look.

There are men selling vegetables at the roadside too. But they do not nod and smile like the headscarved Babushka’s.

The men are uniformly selling staples – potatoes. And all the potatoes are in 25 kg purple see through sacks. The men glower, they do not smile. Violent swerves are observed as some, in desperation to slow the traffic, seem to be barricading the road with their full potato sacks. It is obvious to me that their Babushka wives have driven them to the sales site, unloaded the quota to be sold, then toddled off home to watch Sunday sport on their widescreen televisions.

Nearer to the capital large blue plastic bags containing something green are hanging from trees and vendor’s poles. And a good selection of witches’ brooms. Of the contents of the bags I know nothing at all.

It rains, pockets of fog, larger stretches of mist. I am sure I saw two men selling large automatic rifles and at a bus stop, perhaps out of boredom, a couple of would be passengers committing a carnal act. But it has to be said that my glasses and visor were steamed up, and the moment was caught at the side of my eye.

Finally to the City and the heavens, because it is Sunday, open. Rain in a downpour, vision to ten metres and a litany of roadworks. But I remember the road, turn left at the Harley dealership and within a few minutes I’m in the dry eating soup and catching up with personal news.

My new book, Notes From The Road Vol III is now available; click here for a signed copy.