Moto service at the Landmark London

SECRET LONDON: THE LANDMARK HOTEL, MOTORCYCLE REPAIRS AS IMPECCABLE AS THE HOTEL. 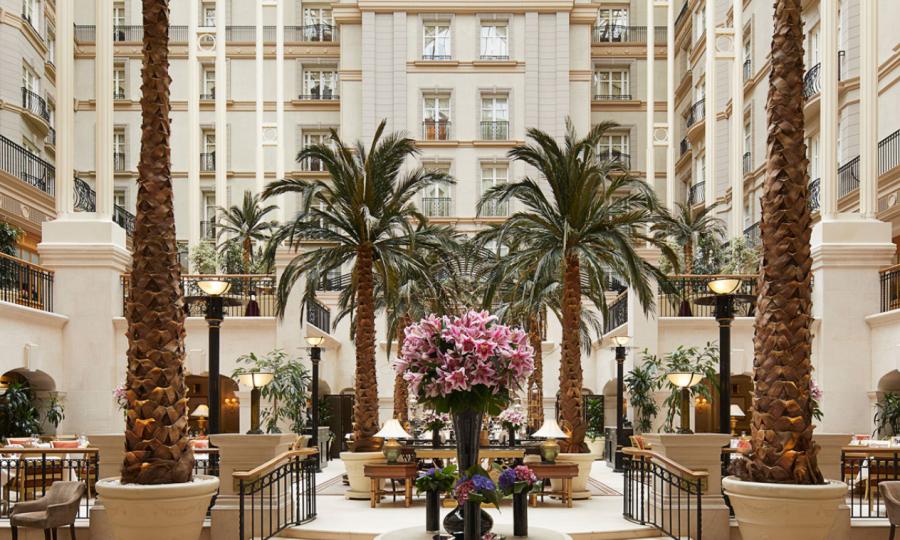 London’s five star Landmark Hotel is recognised worldwide for superlative service. Welding a broken motorcycle on the premises for a non-resident is probably not an everyday occurrence, but they dealt with it, with calm, aplomb and superb customer service.

Earlier, and a ride to the Bikeshed Café to meet with the remarkable Stephen Baker, motorcycle mechanical genius, who, and regrettably for the motorcycle community at least, is currently seconded to maintaining undersea trains.

Thirty minutes from the venue, in a bus lane on London’s permanently jammed Marylebone Road, Moto Gelato giggled and let the gear lever shear off. I knew it had sheared off because I saw the lever laying on the road shimmering and smiling in the sunshine.

My first thought was “Do I have any duct tape?” And my second was, “Wow, that bus was a bit close.”

A gentleman, from Italy as I subsequently learned, approached me whilst wearing a helmet. Observing the gear lever he said “Aaaaah, Moto Guzzi! I love thissa bike. Do you wanta push?”  Grateful and over the roar of the passing buses I shouted “Yessa, please”

He pushed, I paddled astern, and soon we were off the road and blocking the vehicle ramp to the Landmark Hotel. Which was good, for parking in a bus lane on a red route can earn you three penalty points on your licence or get spread like jam on the front of big red passenger transport vehicle.

My helper climbed aboard his Piaggio and with a wave rode away into the traffic.

I sent a text to Stephen advising him that might not make lunch and he replied saying that he was sure he could fix it, and was on his way. Now I have a lot of experience with broken down Guzzis. Not fixing them, just looking at them in states of disrepair. With no disrespect to Steve, I thought I should try plan B.

Plan B was a call to the RAC emergency desk which is somewhere in the North of England. Through to a human and my phone started to fail. Not battery, just gremlins and the man in the North had never even heard of the Marylebone Road. I tried phonetics, and at one point tapping out morse code, which, as he evidently had no military service, could not understand either. After a very long fifteen minutes he found my location and said he would send a patrol which should arrive promptly in the next four hours.

Before departing, the gentleman from Verona had delved into Google and told me of his Guzzi dealer on Shepherd’s Bush Road, less than four miles hence, who would, in all probability have a gear lever in stock. When I called they said, “No problem, just get it over here.” This information re: replacement gear levers, was imparted to the RAC in the North who said “Yes, thank you, a patrol will arrive and advise.”

And Steve arrived instead, crossing traffic lanes with the cool of a long, long distance rider and glided to a halt beside me. “Show me” he said, and I waggled the broken lever. “Hmmm” he intoned and dropping to his knees used a door key to undo the rest of gear lever assembly.

Shall I repeat that? He used a door key to undo the rest of the gear lever assembly!

I looked to the Heavens, looking for God’s long finger, and then looked back at the two parts of the assembly.

Steve said, “If I had some metal glue I could probably fix this” Obviously, he is a level above duct tape. And then, because he is a hugely creative maintenance engineer and full of wondrous ideas he said “I wonder if the maintenance department in the Hotel has any welding equipment?”

I am dispatched to converse with Concierge of the Landmark Hotel. The Concierge, also from Italy and once owner of a Moto Guzzi, understood my plight immediately and handed me the phone pre-connected to maintenance. I explained, and the voice said “No problem”

Back to the bike and in moments two very large gentlemen arrived, both wearing pinstripe suits and ties. I thought, “Oh dear, this is the big heave-ho…”

Instead, the six-foot-three suit, who I later learned was Chief Engineer Keith Price, smiled and said: “How can we help?”

The two parts of the gear lever are held out for inspection. A quick examination and “Could you ride down the ramp to garage please Sir?”.

Which I did with Steve following, for this is London and motorcycles should not be left unguarded, even when in pieces.

Motorcycles parked and we embark on a subterranean journey through the nether regions of the hotel. Through airlocks, doors, down stairs to duck under air conditioning trunking, more doors, everywhere fresh, white, and immaculately clean, into busy corridors passing chefs and serving staff who hurry with intent and we step into offices with computers and focused people and thence into fifty square metres of workshop. With grinding wheels and lathes, and, laid out ready for use, a portable welding machine.

Somewhere above an RAC patrol is grinding steadfastly through the traffic to my rescue. But they’ve had three hours, and they’ve had their chance. And my phone doesn’t work to warn them of their redundancy.

Keith, still splendid in pinstripes, grinds off the chrome layer. That done, his colleague Dave, also in pinstripes but now wearing a heavy leather apron and welding helmet 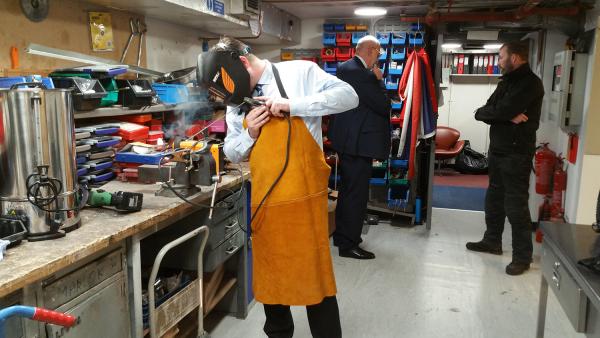 steps up to the mark. Keith, aware of Health, Safety and his responsibilities ushers us out and into his inner sanctum. The walls of his office display photographs of his Harley Davidson “someone stole the brake lever….” a chopped Triumph Triple and a beautifully refurbished Vespa finished in cream and red. He no longer rides, preferring to drive his 1954 two-tone Riley RME.

He says Stirling Moss saw the Vespa and asked Keith if he would refurbish his Triumph Tina scooter. Keith declined; saying he refurbishes stuff for fun not money. We chat about Stirling – I used to work on Stirling’s cars with a school friend whose father owned a motor racing garage. I mention to Keith that Stirling’s sister Pat, an Olympic equestrian rider, taught me to ride when I was spotty teenager. “Ahh” said Keith, “I know Pat” and asked me if I ever went to the Saddle Club with Stirling. “Yes” I cried “I won a prize there for dancing the Twist.” Which dance style dates us all.

Hooting with laughter, confirming how the small the world really is, all three of us return to the workshop where Dave is grinding and polishing the weld. “Like a Gucci jewel” said Steve and indeed he was right. The reassembled gear assembly, now repaired and stronger the original, gleamed and shone, polished to perfection. Back down the corridors, more ducking under the aircon ducting and we’re back in the Garage.

Steve puts the lever assembly back, this time using an Allen key rather than the door variety, in under three minutes. I am stunned. It takes me the same time to start the bike.

A call from Steve’s phone to cancel the RAC and we’re good to go.

Sincere handshakes with Keith and Dave; the latter a BMW 800 owner just like Steve’s, and we’re up the ramp and into the beginning of the sunset to wend our separate ways home.

I’ll return to Landmark before long to buy Steve a Cream Tea. And Keith and Dave if they care to join us above ground.